Stephanie Dowrick and her new book "Seeking the Sacred" 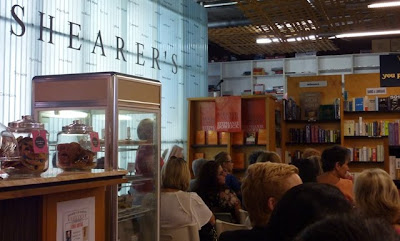 Tonight I went to hear Stephanie Dowrick at Shearer's Bookshop on Norton St. 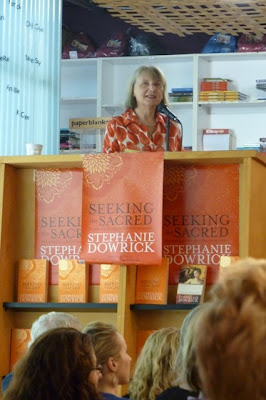 It was a full house, proving once again Stephanie's popularity, and her ability to address her reading audience perfectly.
She spoke about her new book, Seeking the Sacred, and highlighted one or two aspects with great lightness of touch. I have heard her speak about the book on several occasions, and each time the talk has been substantively different - evidence of both the richness and complexity of the book's themes, and also, I suppose, her own continued interest in its subjects. 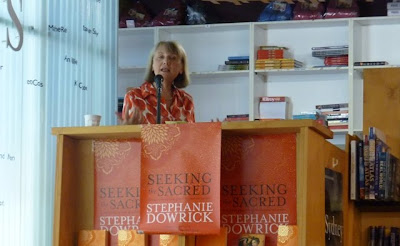 For Stephanie it is the second major book to be released in as many years, and she addressed this incredible feat directly. While she was working on her previous book, In the Company of Rilke, the idea for this book, or one very like it, began to emerge, and she started to work on the two books simultaneously. Seeking the Sacred is, she says, very much informed by Rilke's own philosophy, especially his rejection of dogma while still searching for transcendent meaning and a way of living spiritually.
In an age where strident voices on all sides of the religious "debate" are accorded the most coverage, Stephanie sees a need for a more moderate, more thoughtful voice to reclaim the discourse surrounding religion and spirituality. Religion need not be a "debate" at all, but instead a mutual search for meaning and transcendence.
Stephanie's influences have been varied and rich, and she talked about her own personal shift from a psychological filter to a more overtly spiritual one. This she sees echoed in the world around her, and it is part of the thesis of Seeking the Sacred: that we ache now for connection, for community, and are discontented with the careful delineation of our own difference and separateness.
Two of the things that I find most relevant in Stephanie's ophilosophy are the elevation of the status of the seeker; and the recognition of the diffuclty of the spiritual path, and the inevitability of our own occasional failings. Indeed, I asked a question about the latter subject, because I recognise the power in the acknowledgement of this universal truth - that we will always fall short of our own expectations. Part of the charm of Seeking the Sacred is this gracious and grounding nod to our own shared fallability. There is a lack of sanctimony that is refreshing and, ultimately, empowering.
As Stephanie pointed out in her talk, we live in an age where people want to find things out for themselves. Perhaps they even need to make their own discoveries. We are no longer content to have our worldview served up to us ready-made. It is this rejection of all-questions-answered systems that perplexes, and ultimately defeats, the churches. While they demand that people shut up and take the medicine, people like Stephanie Dowrick are answering to people's profound need to be respected, to have their curiosities and misgivings given due consideration, and to approach the search for meaning with a good humour and light-heartedness that transcends judgement and rejects exclusion.
What a wonderful night! I have already plunged back into the book, aware of new levels of meaning. And I am re-enthused about introducing the sacred into my everyday life, and vice-versa. 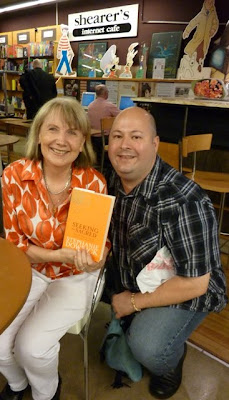