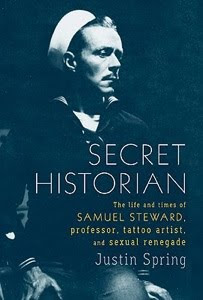 Samuel Steward may just be the most fascinating person you've never heard of.
Academic, literary novelist and friend of the great, he was also a pornographer, a tattoo artist and an obsessive sexual collector. He kept extensive notes of a gay sex life that lasted forty years, and his careful and exhaustive notes were an invaluable source of information to sex researcher Alfred Kinsey. And though he had once been a close friend of Gertrude Stein and Thornton Wilder's lover, though he had once rubbed shoulders with Rudolph Valentino, Jean Cocteau and Genet, he ended his days as a miserable, filthy recluse, too scared to walk on the streets of suburban San Francisco, lost in mountains of nostalgia and mouldering away in bitter reverie, steeped in dachsund's piss.
Justin Spring's extraordinary book, Secret Historian, a finalist for the National Book Award, is one of the most fascinating I've read in a long time. It is a reclamation of an obscure but enthralling character, and a type of queer social history that captures perfectly the torments and dangers of homosexual existence in the early and middle parts of the twentieth century. Pacy, sexy and beautifully written, Secret Historian is easily one of the most unique books I've ever encountered.
Its subject, the slender, sexually obsessed Steward, is surely one of the most intriguing figures in literary history. A daringly provocative sexual outlaw, he managed to sleep with the elderly and decrepit Lord Alfred Douglas and to insinuate himself into Gertrude Stein and Alice Toklas' Parisian literary and artistic salon. He also managed to seduce their Vietnamese houseboy, a wonderful detail that immediately called to mind another brilliant book, Monique Truong's Book of Salt, a novel about a similar queer Vietnamese houseboy living with Stein.
Justin Spring, a writer with a special interest in queer art, has created a dazzling work of gay history that deserves to stay in print forever. Though never less than an entirely engaging author, he is also scholarly and rigorous in his approach, and the occasional footnotes are fascinating and illuminating all on their own. It is a big book in every sense, and Spring proves himself not just as a stylist, but as an historian, an art critic, a literary commentator and a good old fashioned gossip. He has a wonderful eye for the obscure and quirky detail, for the commonplace that is, in fact, utterly intriguing, and brings the story to life. For example, he tells of Steward's insane decision to send Toklas and Stein a Mixmaster, causing the gift to cross the atlantic at the outset of World War Two. Miraculously it arrives, and Stein (who comes across in this book as a warm and funny matriarch) sends him an enthusiastic letter saying:

How wonderful to think of the grandmother of modernism delighted by the quintessential emblem of American domestic technology.
Of course, there is plenty of sex, much of it transgressive, kinky and downright dirty. Steward had a taste for rough trade, hence his career shift into tattooing, and was something of a pioneer in the BDSM community. Spring's rendering of Steward's extraordinary sexual journey is really quite remarkable, and certainly brought to life for me the long, long history of proud aberrance and homoerotic culture.
I don't think I even once grew tired of Secret Historian, and found its long and intricate tale of desire, compulsion and sexual martrdom constantly stimulating and eye-opening. The cameo appearances by many of the literary greats of twentieth century America make it even more intriguing.
Quite simply, it is the most perfect biography I have read in many years.
Email Post
Labels: biographies books gay modernism queer reviews whimsical