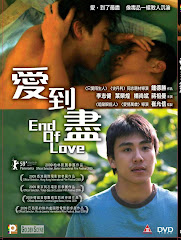 Ming is a 22yo Hong Kong hustler and drug user who falls in love with the older and screwed-up Yan. Betrayed, he finds himself sent to a Christian rehab centre, where he becomes besotted with his mentor, the handsome and hopeless Keung.
Without giving too much away, that is the basic plot of End of Love, a beautifully shot and well-acted romantic drama from Hong Kong, directed by Simon Chung. Released in 2009, it is one of a number of hard-hitting queer stories to emerge from Hong Kong, though of all of them this is probably the most professionally produced and dramatically successful. The trick, I think, is in the casting.
More than being good actors, the characters are, in every case, perfectly played and perfectly physically matched. The lead character Ming, for example, could so easily have been played by some pretty and vapid young thing. Instead the director has chosen Chi-Kin Lee (who was Tony Leung's body double for the nude scenes in Lust, Caution). Lee is, quite simply, perfect for the role, and is utterly believeable from his first moment on screen. His casual masculinity and boy-next-door looks are exactly the requisites for the character he plays, and his astonishing - though perfectly natural - physique comes only as an added extra.
Alex Wong, as the deplorable lover Yan, is exactly the right combination of tortured closet-case and sexual predator, a 30-something queen on the verge of losing his looks and seeking redemption in the youth and beauty of another. But most alluring, most magnetic, is the extraordinary Guthrie Yip playing Keung, the Christian ex-junkie who takes an interest in the shiftless young Ming and ultimately becomes his father-figure. His every action is a joy to watch (the tantalising occasional glimpses of his tattoed arms providing an exciting hint at the duality of his character) and through every scene he is pitch-perfect, never for a moment over-acting. Why he is not more of a well-known heart-throb I can't imagine, for I have rarely encountered so much presence on-screen.
End of Love is a fascinating film on so many levels. Its exploration of Christianity, for example, is rare in Hong Kong film, and rarer still in queer films. The do-gooding Christians are not demonised, and Chung affords them the same complexity and subtlety he grants to the film's more obvious, and more queer, heroes. It is, too, a fascinating exploration of unrequited love in Chinese culture, where homosexuality shifts and struggles in its relationship with mainstream society. Chung's Hong Kong is hardly a queer paradise, but its gay residents are leading full and complex lives which are at the very centre of things - right in the over-crowded suburbia of Hong Kong, among real people. With their addictions and their obsessions they are still not fringe dwellers. With an astute plot twist he shows up the same problems at work in heterosexual relationships, and the film remains staisfyingly sophisticated in its analysis of human desire and its depiction of queer realities.
Chung's film, an exceptionally satisfying and entertaining piece, proves that some of the most exciting queer art of the twenty first century is emerging out of Asia, and is telling a whole new set of stories. New stories in new locations, but still powerfully recognisable to any sensitive viewer. I shall seek out his future work keenly.