STORIES from across the globe are being shared at the Newtown Festival’s Writers’ Tent this Sunday.

Organiser Derek Dryden said they’re back for the seventh year as it’s the shop’s literary gift to the readers of Newtown.

“It’s not the Miles Franklin or the Premier’s Literary Awards, it’s a group of authors having a fun day out at a great festival.” 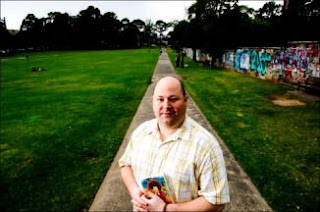 Cabramatta travel writer Walter Mason will be in conversation with his publisher Maggie Hamilton at the tent about his latest book Destination Saigon.

“It’s very prestigious and it’s a tremendous privilege (to be part of the festival) as an author as Newtown is my readership,” he said.

Mason spent four months travelling from the south to the north of Vietnam to see the countryside, discover religions, and experience the culture and humanity of the people.

Mason said the book is about friendships more than travelling and the experience of the people.

He said one of his favourite experiences was visiting a friend, who is a monk, who took him to stay at a temple on an ocean cliff. “Every night, with his fisherman friends, they would say a prayer for me and the people of Australia,” he said.

“I thought that was such an amazing gesture because they didn’t know me, they didn’t have too, but I felt so included.”

Mason said he’s looking forward to seeing the two speakers he has been placed between, Geesche Jacobsen speaking about crime and political commentator Annabel Crabb.