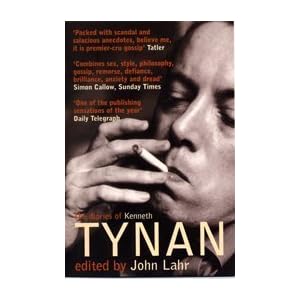 The diary is a literary form that fascinates me. I suppose my interest is prurient, the idea that I might have saccess to the most intimate thoughts of someone. I have read, for example, the diaries of Joe Orton over and over, and I still think they are one of the great classics of Queer literature, I am also a lover of the Andre Gide diaries, the Cecil Beaton diaries and, of course, the Andy Warhol Diaries - almost the quintessential book of my youth. I was interested to see how the diary, such a truncated and patchy form, might translate into an audiobook.
I have had The Diaries of Kenneth Tynan audiobook for years now but never seemed to get around to listening - mainly because it was on cassette, and frankly the occasion to listen to a cassette rarely occurs. But I finally dusted it down and popped it in to the unloved but still present tape deck, and was completely bowled over by its magic.
I had been aware of Kenneth Tynan, recalling dimly how the publication of his Diaries and of various memoirs by various wives had caused a great deal of scandal. I knew nothing concrete, however, so this production was a delight and a surprise from beginning to end.
It is a collection of Tynan's diary entries read with immense skill by one of my favourite people in the world, Simon Callow. Callow, himself a big fan of Tynan's work, does the whole thing a great justice. His reading is well-paced, arch and very funny and he is able to imitate people like John Gielgud and Noel Coward (just a couple of the many celebrities who are mentioned in the Diaries) perfectly.
Tynan was a theatre critic and dilettante who embodied the swinging 60s in London. He wrote and produced the scandalous sexy West End review 'Oh Calcutta!' and was famous for being the first person ever to say "fuck" on television. He was a wit and intellectual of the old school, and like so many truly fabulous people, the principle focus of his genius was his life. He was lazy, disorganised and chronically impolitic, so found it very hard to get any sort of work or keep any sort of job. The Diaries are witty and beautifully concise. They also reveal the sordid sexual life of the author. I say sordid, but it really does seem a bit tame in this day and age. You see, Mr. Tynan was a devotee of that great Bristish sexual vice, spanking. As he himself recognised, it was a taste shared by a surprising number of people in the British establishment. And though doubtless it would have destroyed his reputation had people known at the time, now it all seems quaintly demure, perhaps even wholesome. His fulsome descriptions of buttocks, penises (his own) and women's private parts had me rushing, occasionally, for the remote control, terrified that the neighbours might hear. I think Tynan would have approved.
He had a curious attitude toward homosexuality, too, one again reflective of the Briitish upper-classes in general. He counted among his friends numerous prominent gay men, but in private he speculated about their lives in a peculiarly prudish way. The strange thing is that he seemed to envy these men - people like Christopher Isherwood - recognising them as possessed of a kind of agelessness, the source of which he attributes to their homosexuality.
Tynan was also a proud smoker, even though in the final years of his life this smoking began to kill him. In desperate ill-health and mostly penniless, Tynan defiantly kept at his cigarettes till the day he died, suffocating slowly and painfully with a ghastly lung condition.
I loved this production from beginning to end - indeed, I never wanted it to end. It was my companion while I ironed and cleaned for a number of days, and the hours just flew by.
Email Post
Labels: reviews audiobooks sexuality Simon Callow vice