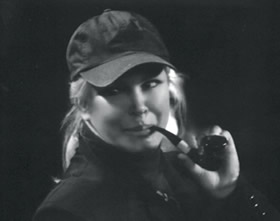 I've been re-reading Mick Brown's wonderful and thoroughly unique mystical travel-memoir The Spiritual Tourist, and coming across his beautiful descriptions of Benjamin Creme I began to reflect on the practice of channeling. Channeling, for those who might be unfamiliar with the term, is the act of serving as a channel for messages from disembodied beings. It is:

n. The act or practice of serving as a medium through which a spirit guide purportedly communicates with living persons.

As a spiritual activity it has quite a pedigree, and was, of course the principal practice behind spiritualism, the great religious trend of the Victorian and Edwardian eras. The aforementioned Mr. Creme practices a species of channeling, serving as the vessel for messages from Maitreya, the future Buddha. In Japan there are many sects and cults devoted to the practise of channeling, which has its roots in Shinto folk-religion. People like Ryuho Okawa, one of Japan's bestselling authors, are acclaimed religious leaders with large and wealthy congregations. Okawa's philosophy is based on his own channeling and spirit journeys, interacting on the spirit plane with people like Beethoven, Swedenborg and the Buddha.

Though channeling might seem like a quaintly antique practice, it has never really gone away. Many of the spiritual "classics" of the 20th century have been channeled material,and these disembodied messages have always proved extremely popular among the reading public. It goes without saying that the process of channeling is viewed with singular horror by folks of a more conventional Christian outlook. But the academic study of channeling has been a fascinating area, and I am intrigued by the sheer bulk of material that is still being released, and that still obviously has great cultural currency. It is frequently presented as straightforward literature, its peculiar mystical origins understated, though celebrated by those in the know.

Channeling appears in the Old Testament in the story of the Witch of Endor, and there is every reason to assume that the religions of the ancients were filled with mediums and channels. I think immediately of the Oracle at Delphi. Channeling also exists in other cultures, and is common in predominantly Buddhist countries. Spirit mediums do a roaring business in Thailand, and in Vietnam the traditional ceremonies of channeling, known as len dong, are wildly popular, though officially outlawed. It is worth remembering that Cao Dai, Vietnam's great indigenous religion, was founded through an act of channeling, and its holy books based on channeled writings.

In the English speaking world there is, and has been for generations, a vast literature of channeled material. The most pre-eminent practitioners in the present day are Esther and Jerry Hicks. Esther Hicks channels a "group of non-physical entities" who operate under the singular name Abraham. These teachings are vaunted by Louise Hay (who publishes their books) and Wayne Dyer. Hay has a history of championing channeled teachings - previously she has been an enthusiast of the 1980s channeled classic Emmanuel's Book, as well as A Course in Miracles, whose scribe claimed to be channeling none other than Jesus Christ himself.

When I worked in a New Age bookstore the channeled teachings section was by far the most popular, its books most consistently bestsellers. Luminaries of the genre include Sanaya Roman, Ramtha, Elizabeth Clare Prophet and Jane Roberts.

I'm not sure what I think about channeled writing from an academic perspective. Obviously there is some kind of deep - and probably ancient - need to cast folk-philosophy as somehow suernatural. The act of channeling seems to be hardwired into the human mystical consciousness, and it is probably just the newest name for the older activities of prophecy and shamanic trance. From a literary angle, I have to say that channeled writings tend to veer toward the confused and prolix. Without being snobbish, I really do find most of the material presented as channeled to be very difficult to read. I think this may have more to do with an unwillingness to properly edit material viewed somehow as sacred.

I think, too, that people have a great need to connect with supernatural spirit guides, be they angels, saints or other mystical beings. The phenomenon of channeling, and the extraordinary popularity of channeled writings, points to a victory of a really old set of folk religious beliefs which doesn't like like fading away anytime soon.