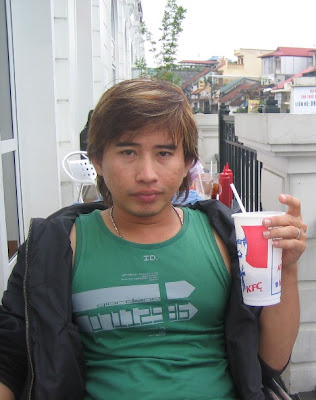 When I first started visiting Vietnam there was no Western-style fast food.
A couple of places around Pham Ngu Lao were making some really atrocious pizzas, and that was about it.
The first real fast-food place was the Filipino hamburger chain Jollibee. Then came the Korean chain Lotteria, and a local invention called Chicken City (which, translated into Vietnamese, sounded like a brothel). But one day in the late 90s KFC arrived, and the Vietnamese culinary landscape was changed forever.
KFC initially pitched itself as a high-end food option. A meal there cost the same as it would in Australia, which pretty much put it out of the reach of the average Vietnamese. The tactic obviously didn't work, however, and the prices soon tumbled. In the scheme of things, it is still an expensive meal-option, but now it's a consideration for a special night out, rather than just a hang-out for foreigners and overseas Vietnamese. KFC also had it pretty tough during the whole chicken flu scare. They managed to see it through by introducing prawn burgers and importing their chicken from Australia.
They do a swift trade in loyalty cards and discount vouchers among middle-class Vietnamese, and it has become the ultimate venue for children's birthday parties for wealthier families. They also deliver (in Saigon, at least), and my friend Kien always got a kick out of the fact that they knew his name and his regular order the moment they answered the phone. "Hay lam!" he'd remark, flush with the cleverness and modernity of it all. And I've gotta say, I love my chicken delivered.
My working class friends still see it as impossibly posh. I once invited a friend there for a quick snack, and he insisted we drive five kilometres back to his place so that he could get changed into something more appropriate. When he finally got his Original Recipe burger he was incapable of eating it, a combination of excitement, social tension and the fact that he found it quite unpalatable.
This is a pic of Kien taken from the balcony of my favourite Vietnamese KFC - overlooking Lake Hoan Kiem in the centre of Hanoi. A wonderfully romantic spot in which to eat overpriced fried chicken.
Email Post
Labels: fast food KFC saigon vietnam Vietnamese food