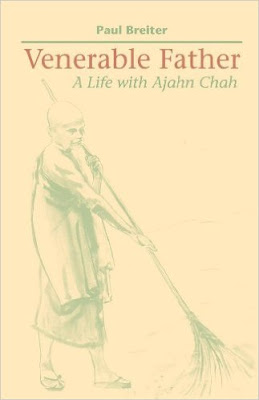 If you are involved with Buddhism for any period of time you learn all the really big names behind the "great wave" of Buddhism into the West. These were the Venerable Masters from various countries and traditions who accepted Western students (Americans, most strategically) and so became enormously influential in the world of what used to be called "Western Buddhism." Some of the legends are Seung Sahn Sunim, Kalu Rinpoche, Chogyam Trungpa and Katagiri Roshi.

One of the only really big masters from the Theravada tradition to be well-known in the West was Ajahn Chah, and I have just finished a quite lovely little memoir about him called Venerable Father.


Ajahn Chah was a gruff, uneducated monk from Thailand's Northeast. Already an old man when hippy backpackers began to invade Thailand in the 1960s, he hesitantly accepted some of them as novice monks at his rough and no-frills rural monastery, and a legend - and worldwide Buddhist movement - began.

Belonging to the forest meditation tradition of Thai Buddhism, Ajahn Chah was not the kind of monk that would normally find celebrity in Thailand. Ugly, coarse-mannered and speaking a Laotian dialect, he was the type of country bumpkin religious practitioner that middle-class Thais made fun of. His great and sincere commitment to religious life, and his skill at teaching meditation, caused his early Western followers, however, to revere him, and eventually he established the first ever Buddhist monastery run only by Western monastics.

This meant Ajahn Chah became something of a celebrity in Thailand, and young Thais became suddenly interested in a style of Buddhism that had, for many years, been viewed with scorn. He is still revered there, and considered one of the greatest Dharma-masters of the 20th Century, along with his contemporary Buddhadasa Bhikkhu. The fact that one of his early Western students was Jack Kornfield also meant that the Ajahn became a well-known figure in the West.

Venerable Father is an affectionate look at the great man through the eyes of one of his American monks. Paul Breiter spent many years ordained as a monk at Ajahn Chah's monastery in Bung Wai, and later he served as his translator when he toured America. This book tells the story of his relationship with the Master, and is a warts-and-all look at a unique and long-lasting student-teacher relationship that spanned time, culture and temperament.

I was fascinated by its gossipy stories of monastery life, and its occasional casual references to Buddhist luminaries like Ajahn Sumedho, wo was just starting out his religious life (now he is revered as a saintly figure in Thailand).

It's a well-written and constantly fascinating insight into the frustrations and longings of a monk's life, and the difficulties and privations suffered by monastics in the Theravadin tradition. He also approaches points of Buddhist doctrine with a deft, light touch, and I found it stimulating and enlightening to read.
Email Post
Labels: Americans books buddhism monasteries monks Thailand