Paul Capsis - Make Me a King


Glorious Australian singing legend Paul Capsis is just getting better and better. From the very first track of his new CD Make Me a King, Mr. Capsis won me over with a raspy, raw and utterly perfect rendition of the Nina Simone torch song Feelin' Good. The whole CD is perfect from beginning to end, taking the listener through an emotional roller-coaster of song, all favourites of Capsis, and arranged and re-told in a style that only he can pull off. 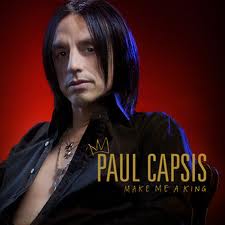 There is much of the cabaret in this collection, and more than a smattering of camp, from the ironic album title to the daring (and really beautiful) cover of Judy Garland's The Man That Got Away. I feel like I'm in a smoky cocktail lounge listening to Capsis win over his audience with his plaintive voice and slinky moves. And isn't he looking slinky on the cover? Too gorgeous for words - that alone would make me buy this CD.
Am I giving away too much when I confess that I remember when he was Paula Capsis, a diminutive but very sexy gender illusionist doing Diana Ross impersonations at the legendary Albury Hotel? Even then we knew he would be a star, and I have followed Mr. Capsis' career closely since then. Seeing him live really is something else, and I have never known anyone not to be bowled over by his sheer, raw talent - the same talent that is so much in evidence on this consistently terrific CD.
The highlights? Well, it's hard to pick a favourite on an album that is so complete, and seems almost a narrative of pain alternating with celebration. But I keep returning to his light and ever-so-slightly-bitter rendition of Billy Holiday's What's New, and the almost-reggae cover of the fabulous Irma Thomas gospel-blues song "Ruler of My Heart."
There's no doubt that Paul Capsis is Australian showbiz royalty by now, and I am desperate for him to return to the big screen (remember how he stole the show in his supporting role in Head On?). But until that day I can keep company with Mr. Capsis on my iPod as I listen to this glorious CD over and over again.
Email Post
Labels: camp CDs favourites gay gay icons Paul Capsis reviews sexy