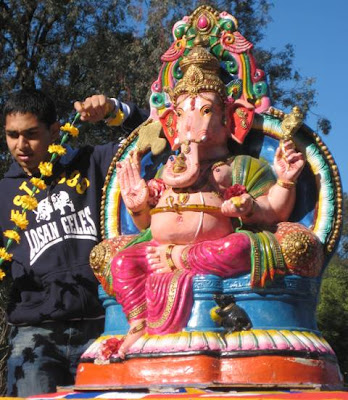 This morning we went to the Hare Krishna Festival of Chariots in Liverpool.
It was a wonderfully chaotic and refreshingly disorganised affair, which hadn't even begun two hours after the advertised starting time. This was lucky, because there was a wonderful feeling in the park, everyone so happy and energetic, and beautifully dressed.
There were two floats - a large trailer carrying an image of Srila Prabhupada, the founding guru of the Hare Krishna organisation, and a car with a big statue of Lord Ganesh on its roof. Just before it left, a youndg man clambered up onto the car to decorate the image of Ganesh with a garland of plastic flowers.
It was such a wonderful moment.
Email Post
Labels: festivals Ganesh Hare Krishna hinduism likes