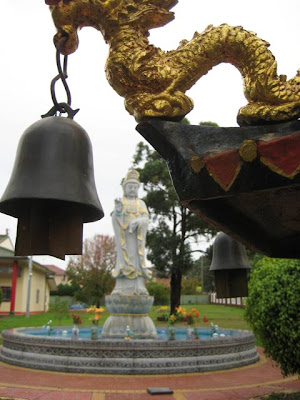 I often wonder how mindfulness has become such a buzzword in popular culture.

It was probably Thich Nhat Hanh who popularised the idea in his books and teachings - that was certainly where I first encountered it, back in the early 90s.

Then later on it was suddenly popping up everywhere - mindulness meditation classes were in church halls, there were dozens of books on mindfulness and psychotherapy. Recently, Thich Nhat Hanh has even co-authored a book on mindfulness and eating, and it's not the first one.

It seems to be the one Buddhist idea that has really entered the mainstream, perhaps because it describes a quality that many in the contemporary Western world feel is lacking in their lives.

Simply explained, mindfulness is the act of careful attention to whatever is going on in the present moment.

Instead of day-dreaming as we do physical tasks, for example, we become mindful of the task at hand, recognising its value and trying to do it as well as we possibly can. In the broader consideration, it means existing contently in our lives exactly as they are now, without worrying about the future or regretting the past.

It seems like a simple idea, but the practise of it is very difficult. In our culture we always need to be doing something in addition to what we may be actually doing. So we listen to talk radio while we wash up. We listen to audio books while we drive. We meet with friends to go to the movies, or see a play, or try a new restaurant. We rarely allow ourselves to just simply be, and to enjoy whatever it is we are engaged in.

I'm not surprised that a Vietnamese Zen Master has been the one to really propagate the ideal of mindfulness in the West. In Vietnam I have noticed that many people are really capable of exercising mindfulness and glorying in the joy of the present moment. If you watch monks carefully, you can't help but notice the care they devote to each and every action: pouring tea, eating, sweeping, cutting herbs from the garden. And I also notice that in Vietnam people still seem to genuinely enjoy the presence and company of friends. They don't need an excuse to see people they like. Outings and activities are not necessary - it is enough to simply sit in each other's presence and delight in the sheer closeness of the one you love, much like that other great Master Winnie the Pooh.

Dianne said…
Nice post Walter. I find the word itself requires attention - it's a word that just doesn't roll off one's tongue. Perhaps it's the subconscious struggling with the thought and wanting us to be human doings rather than human beings. Oh, and then there's Winnie, lovely ...
29 January 2013 at 16:24