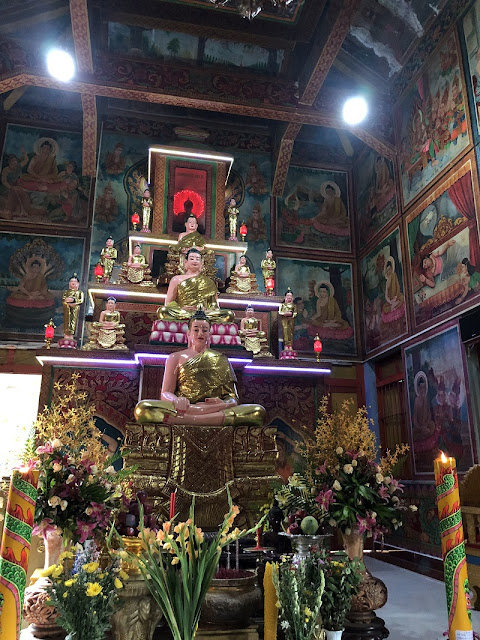 The Four Noble Truths are the central ideas behind Buddhism, the "four pillars" on which the entire structure of the Buddhist religion are built. These were the four realisations that the Buddha Sakyamuni arrived at while sitting under the Bodhi tree, and they are a kind of distillation of his enlightenment experience. They are:

Pretty dry stuff, I'm sure you'll agree. It is hardly the kind of revelation that would set the world alight, and yet it is exactly this measured and un-dramatic insight that converted the first group of monks to the Buddha's philosophy, and spawned a worldwide religion that is still going strong 2600 years later.

The first truth - that life is suffering - is normally the one pointed to with scorn by the critics of Buddhism. "Not very positive," they say, "hardly the kind of thing to fill someone with hope." It is this brutally realistic assertion that has caused some to accuse Buddhism of being nihilistic, a religion absent of grace and devoid of promise for the future. But it must be said that such a frank assessment of reality does contain some charm - it avoids the magical-thinking of most religion, and instead slaps people in the face with a real party-downer right from the very beginning. It can only ever be uphill from that observation.

Stephen Batchelor prefers to call them the "four ennobling truths," because he sees in them a kind of inspirational call to action: we mustn't sit about and let things be horrid, but instead we are bound to pursue a path out of the suffering which is so obvious all about us.

And of course, in the end it's all about the third truth - there IS an end to all of this, and it's called nirvana. But unlike most religious traditions, this opposite of suffering is not heaven, but an unconditioned state of existence in which nothing can exist. It is an extinction of the self.

No-one ever said Buddhism was easy.

The wording of the Truths cited here comes from Wikipedia