Skip to main content
Labels
Posted by Walter Mason May 12, 2010


Perhaps not unsurprisingly, I often find myself defending Elizabeth Gilbert's mega-selling book Eat, Pray, Love. I mean, it's not like she requires my defence - her massive readership and very healthy bank-balance don't really need much defending. It's just that, in my own humble way, I find myself writing in the very same sub-genre that Ms. Gilbert almost single-handedly invented - the spiritual travel memoir. Indeed, it was her success that caused me to be signed up with my publishing house in the first place - before the popularity of Eat, Pray, Love I would have probably been laughed out of every publisher in Australia. So I feel a great debt of loyalty to Elizabeth Gilbert, and look upon her work fondly.

I was always going to like Committed anyway, simply because it's such a peculiar - and peculiarly old-fashioned - book, a book I am convinced would never have seen the light of day had it not been for its author's exceptional profile and success. And so I am cheered by the fact that it's been successful. 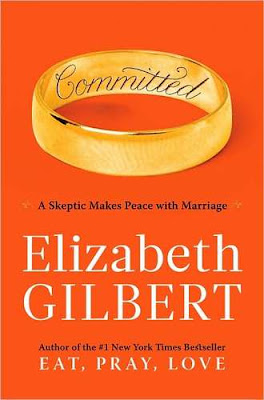 In many ways it is quite a literary effort, a belletristic reflection on marriage, both as it pertains to the author's own life and travels, and to culture more broadly. The central narrative is of Elizabeth Gilbert's own difficult journey toward being married - mostly unwillingly - for the second time. Of course, this story has especial significance for anyone who read Eat, Pray, Love (i.e. half the world), because her new intended is none other than Felipe, the louche Brazilian playboy who swept her off her feet in that book.

But in between this personal tale is a wide-ranging and frequently engaging (no pun intended) meditation on the peculiar history and varied cultural baggages related to the institution of marriage. She finds time to deliver a long explanation of why she believes in gay marriage (and it's actually rather cleverly argued), and she is challenged in her own assumptions about matrimony by the people she encounters in Vietnam and Laos. There are also any number of brilliantly drawn events that speak of the deep and frequently messy machinations of the human heart (I loved the story about the naughty, love-struck young monk in Luang Prabang).

It's much funnier and sharper than Eat, Pray, Love. I also think it is more thoughtful and - no offence intended - a good deal less neurotic. Committed has turned me into a fan of Elizabeth Gilbert, and I am very interested to read anything she has to write in the future.

Unknown said…
I am a huge fan of Liz Gilbert myself. My favourite book of all time is "Eat Pray Love" and, like you, I really enjoyed "Committed" as well.

Her style of writing (as if she were talking to you over a cup of coffee) is what I love most about her books. I not only enjoy reading this form of writing, but aspire to write my own books in a similar manner.

Perhaps you would be interested in checking out my book blog (www.booktooth.com). I include an interview with Liz Gilbert (not by myself - I wish - but really great). She speaks about "Committed" :)
12 May 2010 at 19:46

kit said…
I enjoyed Eat, Pray, Love, but Committed was harder to get through because it was neurotic. I also enjoyed her vignettes like the love-struck monk in Luang Prabang that you mentioned and the socio-cultural values of marriage in different societies. I would recommend this book to anyone who is a skeptic of the institution of marriage.

Walter Mason said…
Kit,
I'm really curious to see the film of "Eat, Pray, Love" - I saw the poster, and I have to say it was absolutely beautiful (Julia Roberts eating an icecream next to a nun).

BTW, have you seen a beautiful little book called "From Sometimes Love Beth: An Adventure in Postcards?" I think you'd like it, and it's VERY Australian!
5 June 2010 at 19:10