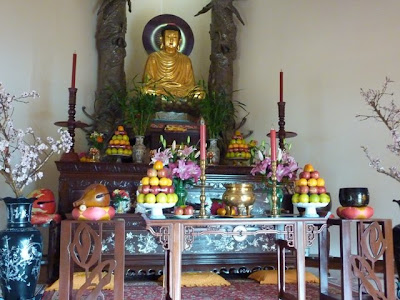 Phap Bao Temple in St. John's Park was the first purpose-built Buddhist temple in Australia, and is a fascinating example of an attempt to fuse some of the architectural ideas of Australian suburbia, Japanese Zen and traditional Vietnamese Buddhist architecture. It was also the first Vietnamese Buddhist congregation to be established in Australia.
Outside in the courtyard there is a flourishing Bodhi tree, a fourth-generation tree said to be a descendant of the original tree that Sakyamuni sat beneath to achieve enlightenment. 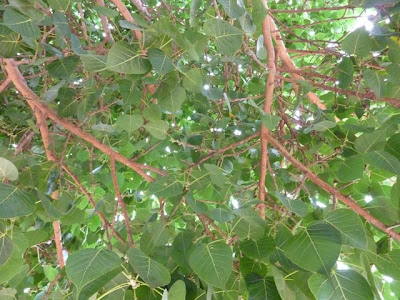 The Abbott is the Most Venerable Thich Bao Lac, one of Australia's most senior Buddhist monastics. These days he mostly lives at Da Bao forest monastery, a branch of Phap Bao temple. He is among the gentlest, most humble and kindest people I know, and his beautiful face speaks of a lifetime of service, meditation and careful regard for all living beings. 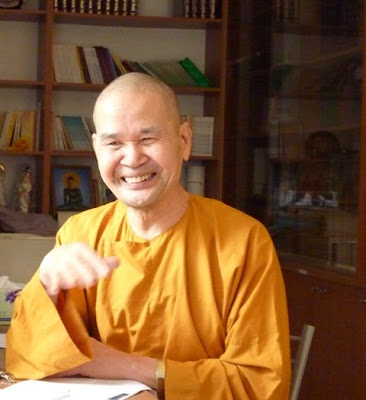 Of all the Vietnamese Buddhist temples in Sydney, Phap Bao is the one most aligned with the ideas and spirit of Zen Buddhism. Monks from Thich Nhat Hanh's Plum Village have conducted retreat days at Phap Bao. When you enter the main prayer hall there is a palpable sense of calm, an exquisite smell from years of incense soaking into the wood, and you can almost hear the crisp tones of the bowl bell as it sounds through the process of prayers and devotions. 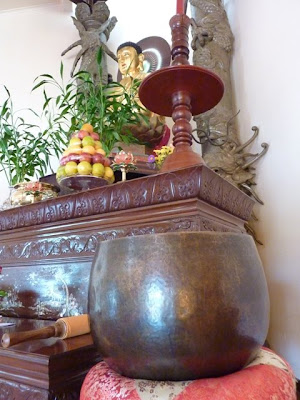 If the main hall is locked, find one of the resident nuns or monks and they will open it for you.
If you walk underneath the main Buddha shrine there are a couple of back rooms with shrines devoted to the monastic ancestors and to memorial plaques for the Buddhist faithful


If you would like to know more about Vietnamese Buddhist traditions and history, I am teaching my Vietnam:4 Cities course as a one day only event at the Sydney WEA in May 2017. I would love to invite you along. You can enrol online here.
Email Post
Labels: australias spiritual greats buddhism Phap Bao Temple shrines statues temples vietnam