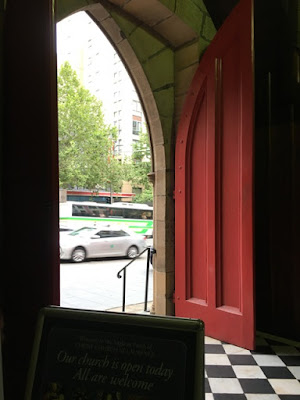 Observing the sabbath by attending church on Sunday morning is something which is a kind of racial memory for people in Christian countries, though in fact it is honoured more in the breach than in the observance these days. Indeed, in post-Christian nations such as Australia, most churches are startlingly empty on a Sunday morning, and the pews see fewer and fewer bums as the years progress.

I think the reasons for this are many. A standard Sunday service is now a thing of mystery, not just to a generation of people, but to 2 or even 3 generations who have never set foot in a church, and have no idea of how or why certain things are done on Sunday. Sunday has also become just another day, and for many people the only day which they can devote to their partners and families. If they are interested in exploring a spiritual life on their own, they can't really sacrifice an entire morning every week and explain it away to their loved ones - I just don't think it's realistic any longer to expect that. If they were going to give up an hour or two on a Sunday, I think it would be much more likely to occur early in the morning or at night. 10.30 - 12 on a Sunday morning is prime leisure real-estate these days, and who in their right mind is going to sacrifice weekend plans for fun because they have to be somewhere else at the middle of the day? I think that churches should look at conducting short services at 8am on a Sunday morning so that the curious and less committed can be out doing other things by 9.30.

The diminishing numbers at Sunday morning services is a source of genuine despair for most ministers and committed lay-people. They have constant meetings over the issue, and obsessively (and sadly) do head-counts each Sunday in the hope that things might have mysteriously shifted. They decry people's willingness to go to the gym or attend yoga classes or meditation groups. "Why can't they make the same commitment to church?" they demand.

I like to point out that the activities they describe tend to take place directly after work, so that people can stop off and do them on the way home. Show me a church that offers a similarly convenient and work-friendly time table.

The last line of defence is always, "Well, religious life requires committment and sacrifice, and Sunday attendance is one of those disciplines that the serious must learn to embrace." While I personally agree with that statement, I also see it as the death-cry of most churches. The truth is most people are only idly curious about religion, or want to taste it and see. Requiring a peculiar sacrifice of time and convenience right at the outset doesn't seem to me a particularly clever way of attracting them into a deeper contemplation of life and its meaning.

I do respond to the idea of the sabbath, and the observance of such a day is important to me. But I reiterate that for many it is an unknown and bewildering concept. And lets face it, most churches are observing it only in the name of tradition, habit and the convenience (and inertia) of the clergy and lay people.

As far as I can tell, the Sunday morning service has got to go. Or at the very least, cease to be the central focus of church life. The world has changed too much for it to be a viable idea any longer. Churches must begin to experiment with times and formats if they hope to survive beyond the next 15 years or so.
Email Post
Labels: christianity church ritual Sundays

A very timely post! I had an interesting conversation today with a priest who has recently arrived in Australia from Germany. I was asking about Church attendance in his homeland and he mentioned that numbers are dramatically down at Sunday service not so much because of the inconvenience of the thing, but rather because of a general turn away from religion. In particular, many parishioners have left the Church because of recent child abuse scandals that have come to light over the last twelve months in Germany. I don’t think the same causal relationship can be used in Australia to explain away dwindling numbers... although I imagine that many people add it to the litany of excuses they have for not attending Mass. Certainly, every parish I have been a member of has always offered an 8am service that is shorter than the 10am (family) Mass... so again, I think we are providing excuses that aren’t necessarily justified!

What interested me most about your post was your comment towards the end: “As far as I can tell, the Sunday morning service has got to go. Or at the very least, cease to be the central focus of church life.” Now, I suppose it depends on how you define ‘church life’, but for me there is no separation between my faith in God and the way that I formally express it – by attending Mass weekly. Attending Church is not (and never has been) the “central focus” for me. Rather, the focus has always been imitating the life of Christ... to the best of my abilities! I attend Church for the sense of community it provides, and as a way of affirming (and strengthening) my faith. I don’t see myself as a ‘better’ Catholic than those who do not attend regularly... in fact, there is something very disingenuous about those whose religious experience comprises of weekly Mass – immediately followed by them screeching out of the car park, blasting their horns at the kids who have strayed into their path, and giving the finger to the parents who are doing nothing to control their brood!! I have seen it... too many times!

Surely, ‘church life’ must be more than simply a 30 minute commitment slotted into a busy week... surely, the primary focus for all should be living a ‘good’ life, and recognising that Sunday service provides a wonderful opportunity to reconnect with our ‘extended family’ and reaffirm our faith.