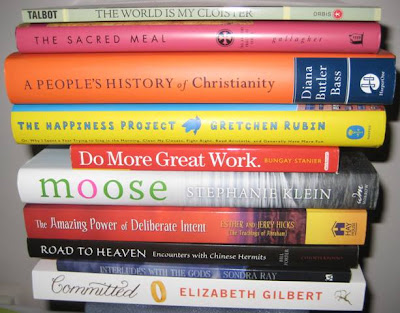 Ok, so here is my collection of new books that I have bought this month. From the top:

The World Is My Cloister - the minute I saw the title of this one I knew I had to have it. It's an exploration of Franciscan monasticism, something I have been interested in for a very long time.

The Sacred Meal - this beautiful looking book is part of the Ancient Practices Series, looking at the history and significance of the rite of Communion. The author, Nora Gallagher, is one of my favourites. I have read all of her books, and think she is one of the most fascinating writers on contemporary religion - right up there with Kathleen Norris and Anne Lamott.

A People's History of Christianity - Diana Butler Bass is one of my newer discoveries, and her writing on the failings of modern Christianity really intrigue me. I gave her book, Christianity for the Rest of Us, to several people. Bass posits herself as an everyday centrist, neither fundamentalist nor liberal, and she writes intelligently and thought-provokingly.

The Happiness Project - I had to get this one because I felt I was part of its creation. I have been part of the author's Facebook group since she began researching and writing this book.

Do More Great Work - I can't remember why I bought this, but it looks great.

Moose - for obvious reasons, I am interested in stories about fat people. Interestingly, I have discovered that many of the writers who write books about being fat AREN'T particularly fat. Which is weird. And kind of offensive.

The Amazing Power of Deliberate Intent - the Hicks are a publishing phenomenon, and I bought this 'cos I am trying to catch up on all of their books. I find them really difficult to read, because they are just transcriptions of talks and seminars, and that NEVER makes a good book. I think maybe they should concentrate on creating properly edited and developed books and releasing them less often. But I guess they are making a mint.

Road to Heaven - I have been aware of this book for years - an old work colleaugue of mine used to be a big fan of it. With my developing interest in Taoism, I suddenly remembered it and hunted down a copy.

Interludes With Gods - I found this in a second-hand shop (Gould's) and it's absolutely fascinating. A compendium of short essays about great spiritual people Sondra Ray has known. I love that kind of stuff, and this book is perfect.

Committed - I just felt like I had to read it, because I see her as the pioneer of the genre I write in (spiritual travel), so I want to follow her career.
Email Post
Labels: books inspiration taoism