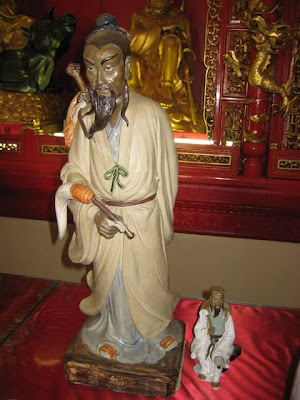 One of the most commonly appearing deities in the world of Chinese folk religion is Lu Dongbin, though he is almost completely unknown to non-Chinese.
Appearing in the guise of a handsome and refined Chinese gentleman with a sword and fly-whisk, Lu Dongbin is one of the Eight Taoist Immortals, whose image is famous for keeping spirits and demons at bay. In the rich world of Chinese popular symbolism, Lu Dongbin's magical sword is the ultimate weapon against supernatural influences, and so appears regularly on charms and talismans.
In many ways he is considered the leader of the Immortals, and certainly he is the most conventional and socially acclaimed of that motley, eccentric group, whose number includes drunkards, cripples and transsexuals.
Lu Dongbin is said to have travelled the earth for 4000 years slaying dragons, so he stands as the saviour of mankind, and ultimately the examplar of manhood.
These pics are of statues of Lu Dongbin on the shrine in the Taoist section of the Australian Chinese Buddhist Society in Bonnyrigg. 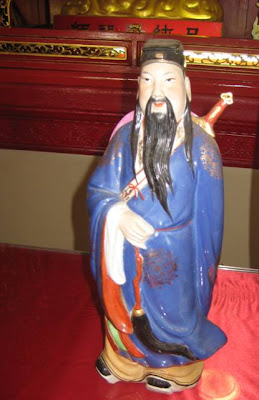 On the day after Xmas I took my son to the Metropolitan Museum of Art to view a special exhibition, which you might find interesting: