What is this row of bizarre objects, I hear you ask? No, not a collection of sex toys, nor a shelf full of ritual implements. This is the range of neti jars available at Sydney's Adyar Bookshop.
I have been an enthusiast of the ancient Indian cleansing ritual known as neti ever since I was a small boy. My mother and I learned how to do it at the hands of a master, a real live Indian swami from the Satyananda Ashram in Bihar. Other children attached to the yoga school would regularly perform neti as an eternally popular party trick, to the horrified fascination of more normal children and parents.
For those of you who might be out of the loop, neti is a simple but effective form of cleansing the nasal passages by running a stream of warm, salty water in through one nostril, and letting it trickle out the other. It does happen, believe me - all it takes is a little forward bending and, sometimes, some patience.
It is an ancient yogic practice, and said to cure you of all kinds of ills. There are other, more extreme forms of neti that can be done with a thin rubber hose and even a piece of rag, but I am a little too sensitive for that.
Within the yogic cleansing repertoire there exists a range of traditional cleansing methods, including lagoo and kunjal, which involves drinking large amounts of salty water and vomiting it all back up again. I once took my long-suffering partner to a yoga weekend devoted to this task, and the poor thing was rather taken aback by it all. He hasn't had a very high opinion of yoga ever since.
But we neti enthusiasts, though small in number, are among good company. Even Oprah Winfrey is reputed to do neti every morning.
I have a really beautiful neti pot which I bought over 10 years ago at the Satyananda ashram in Mangrove Mountain. 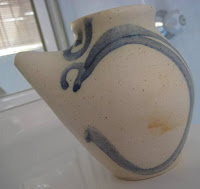 It is a real treasure, hand-made pottery that describes the shape of the Om symbol. It is also a great rarity now, as I believe the potter has passed away and you can no longer buy them.
For those interested in researching the health benefits of neti, there is a fascinating book on the subject by David Frawley which I thoroughly recommend.
Email Post
Labels: health illness India objects yoga