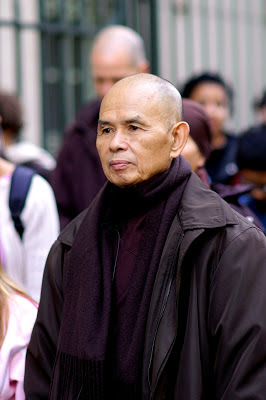 Probably one of my greatest spiritual influences has been the Vietnamese zen master Thich Nhat Hanh.
I remember being very young and travelling around Thailand reading over and over again a tattered copy of his great classic Peace is Every Step, and imagining that I was becoming some sort of spiritual giant. I later realised that one actually has to do more than read.

Thich Nhat Hanh is a truly remarkable person. A polyglot Buddhist academic, Master Nhat Hanh was a social radical in Vietnam in the era of the American war, and had the distinction of getting up the nose of both sides of the conflict. His vision of a socially engaged, inclusive form of Buddhism that embraced the ideas of modernity was simply too radical for the Vietnamese Buddhist establishment of the time, and Thich Nhat Hanh eventually found himself living in exile abroad.

He established a world-famous monastery in France, and is still one of the most prolific authors on Buddhist subjects in English.

Plum Village, his monastery in France, serves as a retreat centre and people flock there from all over the world. Probably one of the best (and most honest) accounts of life at Plum Village is to be found in Mary Rose O'Reilley's The Barn at the End of the World - a brilliant book that I can't recommend highly enough.
Thich Nhat Hanh is 83 this year, but still going strong. I doubt we'll ever see him in Australia now, which is a great shame. But I still read every one of his books as they are released, and am still constantly inspired by his simple and relentlessly practical approach to Buddhism and spiritual living.
Email Post
Labels: books buddhism monasteries thich nhat hanh vietnam writers