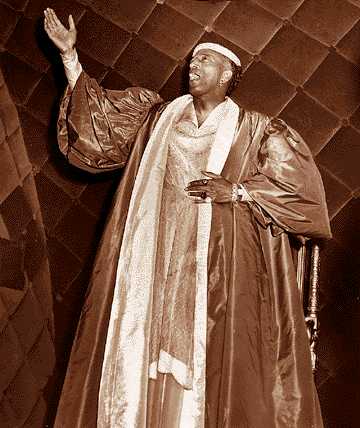 I first found out about Prophet Jones while reading GLQ magazine. The article (a very good one by one Tim Retzloff) details the sad life of Prophet Jones, a flamboyant church leader from 1950s Detroit who was one of the great characters of his day, but was eventually destroyed by the homophobic society in which he tried to succeed.

The Prophet was a tall, colourfully dressed black man from the deep south with a dodgy past. He grew fabulously rich with his preaching, and was one of the first to use radio and television to propagate his ministry.

The fabulous Ms. Aretha Franklin recalls as a child loving his Detroit mansion, which the Prophet had re-painted in bright colours every season. The Prophet's eccentric brand of religion was miles apart from the sober Baptist ministry of Aretha's own father. Jones also kept company with the equally wonderfully named - and these days better remembered - Father Divine, and the two formed something of a mutual admiration society.

Prophet Jones kept a bevy of good looking male secretaries and sailed dangerously close to the moral wind of his times, telling the press that he had no intention of ever marrying and posing for publicity photos coyly wrapped in satin dressing gowns. Eventually such daring proved his downfall, and Prophet Jones was despised by other black leaders for his flamboyance and eccentricity. He was called Prophet for good reason: he was inclined to make prophetic utterances as a small boy, but his mature prophecy was marked by a distinct lack of accuracy. Poor old Prophet Jones fell foul of the law eventually, being accused of seducing an undercover policeman who was sent to seek spiritual healing for a mythical bad back.

The ensuing court case became a press frenzy, and Prophet Jones was sunk for good. I can't believe that such a wonderful figure isn't better remembered. He really should be resurrected as a queer icon, and wouldn't it make a fabulous movie? Actually, I believe an attempt was made to represent him on film - does anyone remember Richard Pryor's turn as the flamboyant, money-loving preacher in that fabulous 70s film Carwash, with the Pointer Sisters as his sexy back-up choir? Correct me if I'm wrong, but I'm quite sure that that was a reference to Prophet Jones. But feel free to let me know other names if you think it is a reference to someone else.

This is an area that interests me very much. So a little prayer today for Prophet Jones, man of God and queer martyr. Rarely has religion been so fabulous.

Anonymous said…
The Prophet did lift many Detroiters from a slaves mentallity. He gave them royal names that they were to strive to live up to. This increased their self esteem. After he fell in 1956, he kept fighting until the end in 1971. It's a reflection of human nature I guess, but after he fell in 1956 all but a few hundred of thounsands left him. When he died in 1971, 15000 came to view his body while 3000 attended his funeral.
24 July 2010 at 03:03

Anonymous said…
I finally remembered his name! I was a teen when he was at his best and not one of my friends remembered him. I knew he was a prophet with an ermine cape, but that is about all. I finally was able to google his name. I know now that for sure I didn't make it all up!
19 October 2010 at 13:39

Walter Mason said…
I wish I could have seen him - he sounds like the most extraordinary person. There's got to be a movie in his story!
20 October 2010 at 08:20

Unknown said…
My grand mother was a "princess" as well as many of her friends. He was long gone by the time I was born, but our attic was full of memorabilia, photos, letters, furniture, and many other things from his church. I'm so disappointed what when the attic was redone most of the stuff was mistakenly thrown away.
21 June 2011 at 12:48

Walter Mason said…
Keisha - what a shame! I think it's so sad how we throw away things, not knowing at the time how precious and fascinating they will one day be. My own family has done it as well.
22 June 2011 at 19:07