I haven't blogged yet about the whole horrible Boy George situation.
OK, I know that the Boy is not exactly blameless in this embarrassing circumstance, but the fact that the judge took the word of a suspect foreign rent boy over George is highly questionable. The whole situation sounded farcical, and the sentence itself was an example of homophobia in the legal system. Boy George is a freak, and the British establishment is never happier than when taking down fabulously creative freaks a peg or two. Think of what it did to Oscar Wilde (who, interestingly, was also brought down by the testimony of questionable rent boys).
Poor old George has been in and out of trouble since the mid 80s, when his stellar career as the world's favourite pop-star came to a spectacular finish because of his spiralling drug addiction and the subsequent court cases.

I was going through some old things and came across this old edition of the National Enquirer that I'd saved from 1986 because of the Boy George story. 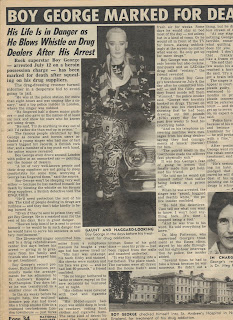 It's a wonderfully trashy "expose" filled with spurious suggestions and dodgy testimonies from desperate hangers-on.
George has never been anything but honest in his summation of his own faults and foibles. He discussed his drug use candidly in his wonderful autobiography Take it Like a Man, and in an intriguing documentary made a few years ago called The Madness of Boy George he was perfectly candid about his fondness for male prostitutes. Which is why I have believed George's version of events surrounding the most recent run-in since the very beginning. George is a man almost addicted to disarming honesty and frank self-appraisal.
Anyway, George is in prison now, where he will shamefully stagnate for at least another 12 months. The whole trial was a farce, and will be a blight on the history of British law.
Free Boy George!
Email Post
Labels: 80s boy george camp homophobia law nostalgia queer