One of the subjects that fascinates me is the place of Hinduism in Vietnamese religious culture.
Large swathes of the central and southern parts of Vietnam were once part of the Hindu kingdom of Champa. This Hindu heritage is still evident in places like Quy Nhon and Danang, where the towers of Hindu temples are still extant and the Hindu Gods often feature in garden shrines in Buddhist temples.
Once you get to Saigon, however, this Hindu past is long forgotten. There is none of the popular worship of Ganesh and Brahma as you see in Bangkok, for example (or even Hong Kong, for that matter). There are still two Hindu temples operating in Ho Chi Minh City, but these are leftovers from the expatriate Indian communities that flourished in Vietnam War era Saigon, and who almost totally departed post 1975. Mariamman temple still flourishes, mostly because it's said to be particularly efficacious in granting the prayerful wishes of women seeking husbands, babies or both. It is also a popular pilgrimage site for women involved in the "entertainment" industries (I use the broadest sense of that term). It is distinguished by the voracious hoards of aggressive incense and flower vendors who sit outside waiting to pounce on (and normally abuse) the unsuspecting visitor. Once you make it inside, however, the shrine is pervaded with a pleasantly bustling atmosphere - young ladies praying and offering flowers, and accepting little bags full of flower petals in return for modest donations.
I much prefer the more sedate Chua Ong, located on the other side of the downtown district and almost entirely unvisited. 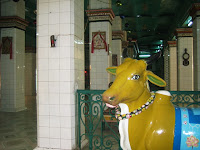 This temple is dedicated to the male deity (whose name escapes me, though I have it written down somewhere) - the Vietnamese simply call it "The Mister Temple."
It is overseen by a dashingly handsome mixed race man who does the prayers and cares for the Gods. The temple is a complex of long, cool verandahs decorated with large, mouldy portraits of some of the key figures of modern-day India - people like Gandhi and Tagore. 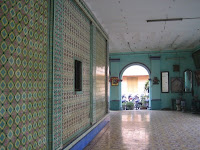 It is very quiet, and for some undisturbed prayer and reflection it is almost unequalled in Vietnam.
Email Post
Labels: architecture hinduism pilgrimage temple vietnam