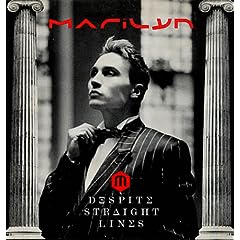 Surely one of the most forgotten figures of the 80s must be that most glamorous of gender-benders, Marilyn. Marilyn was everywhere for a couple of years in the mid 80s. He was Boy George's best pal and sometimes competitor, and the straight press even hinted that the two might be lovers (though the idea was preposterous to anyone who knew anything about gay culture). And while Boy George was cute and cuddly (and no-one adored Boy George more than me), Marilyn was in-your-face sexy, and his androgyny came complete with a dangerous frisson of sexual tension. Marilyn was such a staple of the tabloid press, and such a figure of fun for the teen pop magazines, that everyone simply forgot that he was a singer and performer, and a very good one at that. Calling Your Name was a sublime piece of Supremes-inspired pop, and Cry and Be Free is still one of the greatest and most histrionic queer torch songs ever to have been released commercially.
But Marilyn sank without a trace, despite releasing what is for many (myself included) one of the greatest pop albums ever, the criminally overlooked masterpiece Despite Straight Lines. Marilyn had been described as the greatest white soul singer in the world, and even a cursory listen to Despite Straight Lines will confirm that. It is such a charming and listenable piece of pop-cultural celebration that I have never known anyone who didn't totally fall in love with it the first time they heard it.
Common wisdom has it that Marilyn's career was destroyed by heroin addiction, but Boy George has contended that it ended long before that, when Marilyn appeared on Top of the Pops singing Cry and Be Free and displaying such an overtly feminine (and smoulderingly sexual) performance that he simply frightened the horses.
For me the highlight of Despite Straight Lines will always be the bouncy pop anthem Baby U left Me, the video for which showed Marilyn for the first time as a trim, sexy and reasonably masculine young man. It was a song that sustained me through my final years at High School.
I only ever owned Despite Straight Lines on cassette tape, and miraculously it has survived till now, still quite listenable despite what must have been hundreds of plays. It is now over 20 years old! Imagine my joy when I heard on Facebook that it had just been released, for the very first time, on CD! I ordered my copy from the UK last night, but was rather worried to discover that Amazon had no stock. Still, fingers crossed. I may yet get to hear one of my most beloved albums in digital surround!
Email Post
Labels: 80s androgyny boy george drag gay marilyn music nostalgia popular culture queer TV youtube