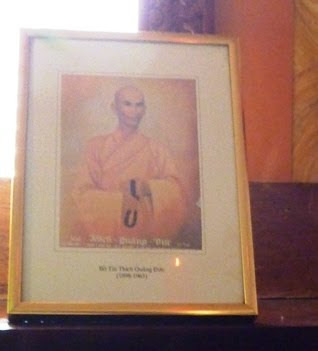 Thich Quang Duc was the first of the Buddhist martyrs in the Vietnamese-American war, and he is still the most revered. In fact, most people in the West are not even aware that many others followed his example and self-immolated in protest at the senselessness of that long and damaging war. Thich Quang Duc was a humble country monk who had been resident for sometime at an unremarkable temple in the suburbs of Ho Chi Minh City. His incredible act of self-sacrifice, which caused shockwaves throughout the world, elevated him instantly to that realm of extraordinary religious figures willing to die for what they believe in. He is known today in Vietnam as a Bodhisattva, i..e. a being who renounces enlightenment in order to help and serve suffering humanity.

The spot on the corner of CMT8 and Nguyen Dinh Chieu, where he poured petrol over his body and set himself alight while reciting the Buddhist sutras, has had a monument to the monk for many years. 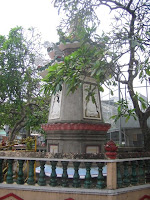 I visited it this morning to pay my respects to this great and brave man. 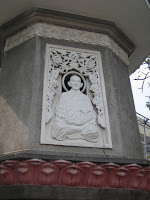 The government is building a much more elaborate monument and memorial park just across the street, and it should be quite beautiful when it's finished. I will miss the simple old one, though - in keeping, as it is, with Buddhist notions of humility. 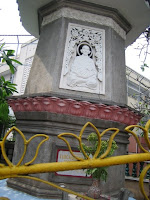