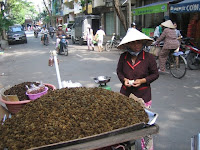 Yesterday we were touring around near the Pham Van Hai Market and we saw this woman pushing a cart of the most glorious looking fruit. It was a small black berry encased in a velvety sheath that glowed in the sun. I had to stop and buy some, but I wisely plumped for the small bag of peeled fruit. 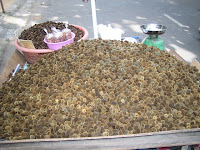 The pulp was also black and incredibly sour - almost inedible. Kien said that it also comes in a candied form which is much more delicious. He said that girls in country towns eat this particular fruit if they are feeling said, so I assume it has some narcotic properties. I never ate the whole bag, so I never found out. He also said it helped one to keep one's figure trim, which could help explain the terrible stomach pains I have today!
Email Post
Labels: alternative medicine fruit ho chi minh city pham van hai vietnam