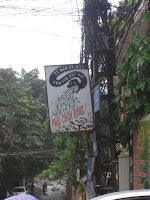 The Social Evils campaign is a tired old piece of propaganda that has been haunting Vietnam since the mid 90s, but still has legs thanks to a press devoted to sensationalised reporting of anything to do with sex, drugs or foreigners, and to a deeply ingrained xenophobia that is never far below the surface of any official Vietnamese rhetoric. 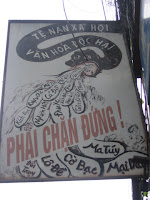 The cities and towns used to be littered with propaganda posters exhorting people to eschew the social evils, but these have largely disappeared. I found an old one that was particularly amateurish and still surviving somehow on one of the back-streets of the west Lake in Hanoi. It features a wonderfully evil serpend spitting out the venom of moral wickedness, and its litanies of sins include things like massage, strong alcohol, heroin and AIDS. In the early days of the campaign there was also a heavy emphasis on homosexuality (which is actually legal in Vietnam) and prostitution.
No-one really subscribes to the simplistic bans on these things - most of us, after all, are attached to our own form of social evil. We just don't like the evils that others so wickedly enjoy.
Email Post
Labels: Hanoi official popular culture vietnam