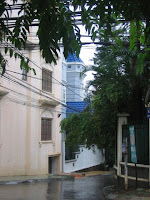 Just back from Hanoi, where I spent the last few days. All the media was saying that Hanoi was under a metre of water, but I found it perfectly ok - indeed, rather less flooded than parts of Ho Chi Minh City after a rainy afternoon.
I have had a long and conflicted history with hanoi. The first time I visited in the eraly 90s it was a dire and charmless place indeed. So much did I hate it that it took me another 10 years to visit, and then under sufferance. I hadn't expected to totally fall in love with it, and now whenever I go I am totally besotted. The people are beautiful, the food is wonderful and the climate is perfect. The lakes make things most picturesque, and there is so much there that makes me want to stay. 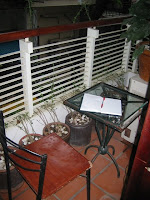 I stayed at an absolutely wonderful little hotel, with a pocket sized balcony overlooking a crowded and always active alley. A perfect place for writing and snooping. 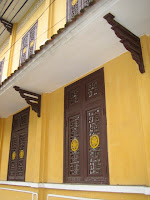 I spent an afternoon at the Ambassadors' Pagoda, a place with a great deal of spiritual significance for me. It was the first place I ever heard the Buddhist sutras being chanted, and the first place that spirituality ever really came alive for me. I find it a peculiar spot now, but I still always make a pilgrimage there to see what's going on. 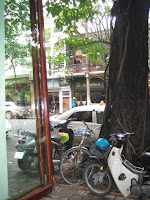 The traffic's probably worse in Hanoi's old quarter than it is in Saigon, and that's really saying something. Parked motorcyles, illegal street vendors, spontaneous tea shops - all compete to make the footpaths un-walkable, and the crowded roads are already dangerous enough without scores of big-bottomed westerners taking up valuable space. 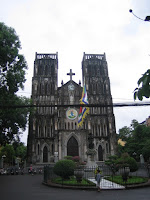 I always like to stay in the Cathedral area - I like its cultured, crowded feel, and its wonderful cafes and boutiques (not that I ever actually VISIT boutiques - I just like the idea that they're there). The cathedral itself, a wonderfully imposing pile in slowly dissolving grey stone and cement, remains a mystery to me - I've never seen it open, no matter what time of the day or night I visit.
Email Post
Labels: beauty catholicism churches Hanoi vietnam

Kathleen said…
What a beautifully atmospheric piece of writing Walter...it was Chandleresque or someone...esque, can't quite put my finger on it but you write beautifully and could well imagine a book of some kind penned by your hand.