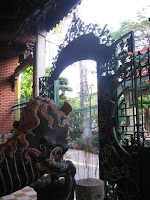 I have mentioned before that one of my favourite places in Ho Chi Minh City is Cholon, the large Chinatown district that centres on District 5. If I ever came to live here permanently I think I would make District 5 my home - I love its buzz, and its slight air of seediness. I love that the Cathedral is a red-light district at night. I love its cheap roadside food stalls and its elaborately expensive Chinese restaurants where every animal imaginable is on the menu. 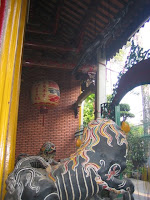 But I especially love the temples of Cholon. They are quite different to all the other temples in the City. The Vietnamese are an inherently mystical people,and tend to take their religion seriously. For the most part, Vietnamese Buddhist temples are ruled over by stern and demanding monks and nuns who impose a strict set of rules on followers and visitors, lending most temples at least a veneer of quiet reverence. But in Cholon anything goes. The temples are run by committees of lay people and rarely have resident monastics. 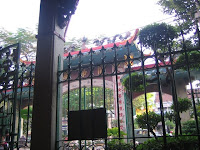 And so the Chinese temples can be quite noisy, constantly busy and a little chaotic. No-one takes their shoes off, and buddhist shrines rub shoulders with shrines to the Taoist immortals, famous old generals and family ghosts. 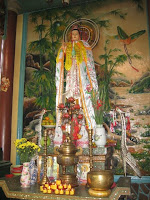 Kwan Yin is ever present, naturally. It is Kwan Yin who unites the religious lives of the Chinese and Vietnamese. Even in Chinese temples no-one dares make offerings of meat or alcohol to Kwan Yin, though nearby shrines may be piled high with barbecued ducks and bottles of rice whiskey. 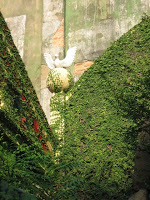 For the most part the temples of Cholon are quite antique - Saigon was, after all, a City inhabited by the Chinese since its earliest settlement. The temples normally exhibit a traditional style of Chinese temple architecture familiar to anyone who has travelled to Hong Kong or Macau. But there are frequently later and more incredible accretions and extensions. 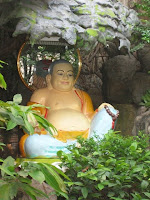 I can and do spend hours sitting on benches in the shadowy, smokey corners of the Chinese temples watching people making their offerings and observing all manner of intricate ritual preserved intact for centuries in this fascinating city-within-a-city.
Email Post
Labels: beauty chinese cholon ho chi minh city temple vietnam