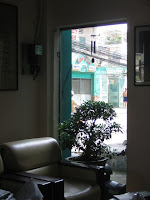 There is a little cafe just around the corner from Van Hanh Buddhist University in Phu Nhuan district that I discovered quite by accident some years ago. 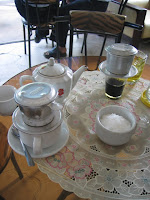 I suppose because of its proximity to the centre of Buddhist learning in Vietnam, the cafe exhibits a distinctly Buddhist vibe and is quite unlike any other cafe in the city.
We call it the Scholars' Cafe, because it is filled with books in all languages and pieces of calligraphy and portraits of monks. 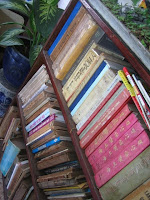 And while in other cafes you might be served by bored country boys or improperly dressed girls angling for tips, at Cafe Thien Si you are served by an elderly lady sitting in the corner doing needlework or reading from a pile of Buddhist scriptures at her elbow. 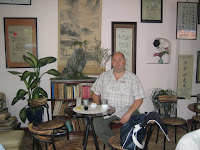 It's the kind of place I would love to own and operate when I am in my dotage. 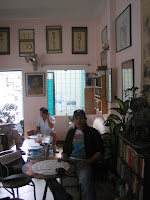 For those interested in spending some time in such a sophisticated setting, the details are: