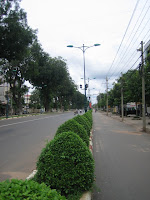 Tay Ninh was a bit of a bore, truth be told.
One long street with not much happening, and the town centre itself miles from anywhere you'd actually want to go.
I felt stranded in a desert landscape, overheating because there was no electricity and so I didn't even have a fan to relieve the heat. 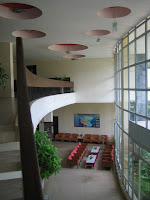 The Hoa Binh Hotel was fabulous, though. Built along Soviet modernist lines, the people who built the Hoa Binh must have had big dreams for Tay Ninh. Unfortunately none of those dreams came to fruition. And so there is a vast concrete hotel replete with conference rooms and hangar-like lobbies standing almost completely empty. My heavy footsteps echoed around the concrete caverns in an eerily lonely manner. There were more security guards than guests.
Walking around the streets was an exercise in futility - the extreme heat and the complete dearth of things to do make it a sorrowful undertaking. 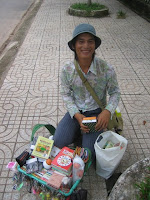 I stumbled upon this man, a lonely street vendor selling a catholic collection of books, wallets and ear cleaners from a tray around his neck. We were the only people wandering Tay Ninh's streets at 1pm. Both of us were very hot, and on the edge of desperation. We both wanted to be out of Tay Ninh. 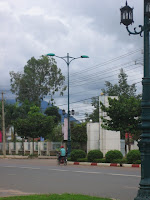 Kathleen said…
But what about the Holy See of the Ca Dai faith Walter? Did you not go there?

When are you going to write a book or memoir? This is so atmospheric, could feel the desperation...the heat...the boredom.