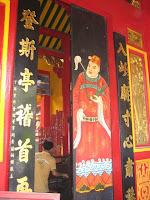 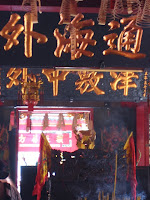 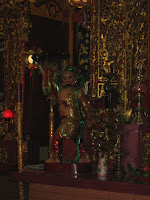 Cholon (The Big Market) is Saigon's Chinatown. The areas bordering District 6 and District 10 and most of District 5 mark the boundaries of what was once one of the worlds largest and wealthiest Chinese cities, a place where an antiquated style of Chinese living continued right up to 1975.

Anyone familiar with Graham Greene or Gontran de Poncins' fabulous (but obscure) book From a Chinese City will be aware of the romantic charms of Cholon, a city-within-a-city - indeed, a country-within-a-country - which was once filled with casinos, brothels and opium dens.

It's still a pretty fabulous place, though much cleaned up these days.

One of my favourite places in all of Vietnam is the Quan Am Temple in Cholon.

Though well within the regular tourist beat (with the obligatory heart-sinking entry in Lonely Planet), Chua Quan Am remains totally and unfazedly old-fashioned. Always busy and bustling, the great billowing clouds of carcinogenic incense smoke ensure that tourists only stay long enough to take a couple of photos. I spend the mornings there, breathing in the incense smoke in an effort to climatise myself. My dear friend Duong has been there for a long time, and I have known him for well over 10 years. He sneaks me into secret spots in the temple, and today I was in the incense coil dispensary, where people bring the long red paper banners that are to be attached to a long-burning incense coil and hung on the ceiling. 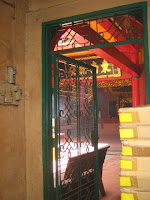 There have been some changes over the years. The place has been tidied up quite a lot. The shamans and fortune tellers who used to hang around have all been sent away. There is even a security guard at the door these days. 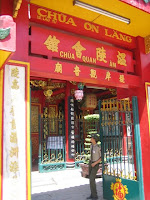 But it is still a wonderful part of old Cholon, hundreds of years old and filled with a delightful jumble of ritual instruments, statues and decorations that span centuries. 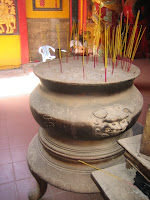