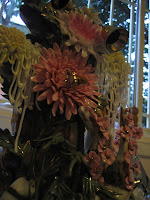 Beauty is in the eye of the beholder, love is where it falls, etc. etc.
So many cliches, all of them so true.
This object was brought home by Thang after some official visit to China. His delegation visited a ceramics factory in some obscure regional city with a population greater than that of Australia and New Zealand combined. Each member was presented with a gorgeous case, and inside it was this thing. Thang said that some people flinched visibly. It's quite enormous and heavy, but Thang carried it home in the confident knowledge that I, of all the people in the world, would love it. All the other members of the delegation threw theirs out at the hotel.
As an object it is hard to describe - a life-sized bonsai tree trunk festooned with monstrous chrysanthemums and bamboo leaves and some other, unidentified, flora. And if you look at it long enough you will discover other, unexpected, features. A tiny little panda is in there, and a bee. And, inexplicably, a bell that tinkles.
When people visit they point and laugh at it and ask what on earth it is.
It is quite extraordinarily good at collecting dust, and whenever I dust it or wash it several pieces fall off. Like the Magic Pudding, however, it seems to regenerate, and I can never identify from where the broken pieces have come. It looks as pristine now as when it came out of its ornate case, despite having lost half a kilo of porcelain pieces.
Email Post
Labels: beauty bibelots china home objets