Well, this is probably one of the most embarrassing things I'll ever do!Here is a peek into the soundtrack in my life! That's right, the current "Top Most Played" songs on my Ipod. The amount it says about my life, my history and my state of mind is just terrifying!

American Boyz by Boy George
This is an album track from his amazing Tense Nervous Headache Album from 1988. This is George at his most New York, a sleek, soulful ballad about getting lots of sex in America. It tells a story, has a terrific sound, and obviously I listen to it a lot!

Got To Be Real by Cheryl Lynn
A disco classic, this rally has substance. And I'll never forget it as the leitmotif for that wonderful movie Paris is Burning.

Me And I by ABBA
A little known album track from their Super Trouper album (my favourite). A dancy pop tune about psychoanalysis!

Head Over Heels by ABBA
This is Abba at their wonderful 80s weird best. They had such a kooky sound by then - really Euro and quite avante garde, in its own peculiar way.

Something Strange Called Love by Boy George
Another album track from Tense Nervous Headache - obviously I love this album. C'mon - I was 18 when it was released - these were my glory days! A smooth, Philly sound, with touches of Stevie Wonder. 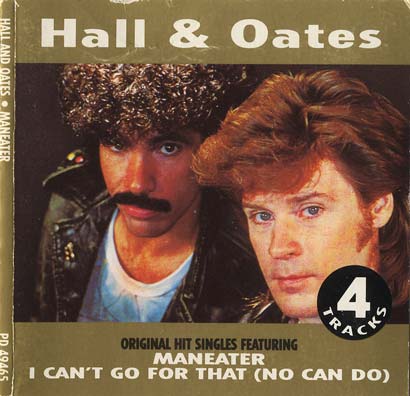 I Can't Go For That (No Can Do) by Hall & Oates
Ha! What can I say! I love the boys. The best crypto-queer band in the world.

Whisper by Boy George
A big, macho sound from the boy. He probably never looked more beautiful than when he released this. An enormous flop, but I think it's gold.

I Love You by Boy George
Playful and upbeat, makes me smile.

UFO by Sneaky Sound System
Hey, something that's been released in the last 10 years! I love this song - makes me proud to be an Australian. And they are keeping the dream alive by retaining that quintessential Australian quirkiness.

Ordinary Girl by Alison Moyet
A big flop from the fabulous Ms. Moyet circa 1986, now it seems wistful, clever and terribly sad.

I Don't Care by Eartha Kitt
Eartha doing disco and doing it well.

Asereje (The Ketchup Song) by Las Ketchup
The most annoying song ever written? I can't get enough of it!

When I Kissed The Teacher by ABBA
Every schoolboy's fantasy.

Santa Maria by Tatjana
Stock, Aitken, Waterman at their very best. This reminds me of living in Vietnam in 1999.

Magic Rhythm by Christie Allen
A true Australian classic. If you don't know this one you should be ashamed of yourself.

Black Money by Culture Club
An album track, but much loved and admired. George and Helen Terry singing the blues.

Say I'm Your Number One by Princess
This was brilliant. This is why I loved growing up in the 80s.