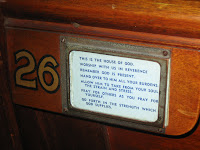 I love church pews.
There is something deeply satisfying about traditional church architecture, and I am never happier than when kicking back on a hardwood, un-cushioned church pew, preferably one with a stand behind the pew in front that holds one's hymn book and bible.
The average pew is an item uniquely designed to inflict the maximum agony in the least possible time. And any attempts made to render an old-fashioned wooden pew comfortable only serves to make it more agonising. I once spent the best part of a week paralysed from spending three whole days luxuriating on the cushioned pews at Pitt St Uniting for a conference. Never have I known such pain. And those damned cushions, latter-day additions, were what caused it. If my butt had been resting on that cold, hard wood, my mind would have warned me earlier that I was cruising for a bruising.
Pews are always at that perfectly unnatural angle which renders any attempt at slumping or making oneself comfortable utterly futile.
But for all their faults, there is nothing more comforting than a gloriously varnished pew, scratched and scuffed, possibly sporting a little bit of scratched-in graffiti (though this is largely absent from Protestant pews - it would seem that Anglican and Catholic kiddies are more inclined to deface church property).
Nothing breaks my heart more than to see churches selling off their pews in an effort to modernise (a sadly frequent occurrence at Anglican churches across Sydney), and replacing them with those insipid brown or grey upholstered-plastic chairs with fabric seats now ubiquitous in churches of all persuasions.
A friend of mine once dropped by a church that was renovating back in the 90s and scored some exquisite pews that were being sold off at $10 a piece. Occasionally, if I'm feeling nostalgic, I'll swing by their house to take a constitutional, forcing myself onto the narrow pew that now graces their living room. And I don't leave till the vertebrae in my back are singing, and I am clutching my sides with pain.
Email Post
Labels: anglican architecture churches nostalgia protestant uniting church