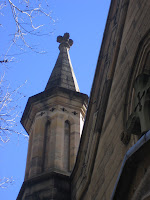 Isn't it interesting how sometimes the Universe needs you to get a message really urgently? And that message will come in several forms in a short space of time, and you'd need to be wilfully ignorant not to get it?
I've been dealing with questions of grief for much of this year. A friend has been plunged into a savage and self-destructive grief which has had an impact on all those around her, and has caused me to question most of the popularly received wisdom on grief. And then my dear cat, a companion for 17 years, had to be euthanased and I was suddenly experiencing my own grief. And then, a couple of weeks later, my darling, beloved Grandma passed away after a truly horrible two weeks of slow dying. I've also had an ongoing and painful health problem which seems to be unchangeable, though I'm going in to have surgery on Monday in an effort to fix it.
And so I have been grieving and struggling with grief and pain, saying lots of prayers and thinking about my own loss.
But this week at work I picked up by chance a book called Dear Lama Zopa, a book of letters to the Lama and his responses. I flicked to the section on death, and in it the good Lama had written the most beautiful and affecting series of observations on the Buddhist perspectives on death and dying. He says that we need to remember that our own suffering is shared with every single other being, and that our own grief and our own prayers must not be just for us, but for all others who have experienced this.
And then, later in the day, I heard Jenny Kee on the radio talking about the death of her own partner, and how a Lama had advised her to remember, not just her own partner's death, but the death of all those who experience suffering and torment.
A day later I sat next to a woman at an event who spoke of nursing her dying mother at almost the exact time I was with my dying Grandmother, and of the immense privilege it was to be able to pray, not only for her but for all mothers who are dying and all those who have lost their mothers.
So I got the message.
My own losses are such a small part of the scheme of things. I pray now for all others who experience loss and suffering.
Email Post
Labels: buddhism grief illness loss spirituality universe