Kwan Yin at the Lodge 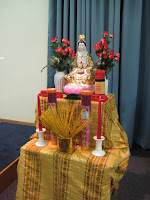 It is interesting how Kwan Yin continues to touch the lives of so many people. I am just glad that I can be helpful in introducing her to new people's lives.
Last Friday I gave my Kwan Yin talk at the Theosophical Society, and though the numbers were smaller than usual - it was the night of the Olympic opening ceremony - the people that were there seemed to really "get it" and many were touched and inspired by the example of the Bodhisattva of Compassion.
I should add that I was very ill that night - I had spent the afternoon in bed, but the show must go one, and I didn't want to disappoint anyone who might be a spiritual seeker and might serve to benefit from the influence of the Goddess of Mercy. It was touch and go a couple of times, but despite my clammy-skinned appearance, no-one seemed to notice that I wasn't in my top form.
Yesterday at work a beautiful Japanese girl came to the counter, and in the course of our conversation I mentioned that I had just given a talk on Kwan Yin. At the mention of this, an incredibly joyful expression came across her face and she said simply, "She is my special protector."
Mine too.
Email Post
Labels: bodhisattva Kwan Yin new age spirituality talks theosophical society