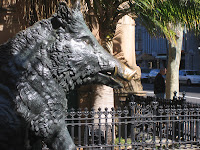 Now, I am a superstitious soul.
Always have been. As a child I would pore through books from the public library on superstitions, curses and the occult, and self-consciously adopt superstitions that had never previously been current in my family. So there were no 13s in my life, I gave ladders and black cats a wide berth, and if I spilt the salt, I would ostentatiously throw a pinch over my shoulder. And then there were other, more personal superstitions, ones probably related to my own little strain of obsessive compulsive disorder more than anything else. Like never sleeping in a room with closed windows, or never drinking water from the hot tap, and never letting raw meat get anywhere near milk (perhaps I was Jewish in a past life?).
When I was old enough to travel to places like Thailand and Vietnam I was in 7th heaven, seeing whole societies that were immersed in superstitious practices, many of which I immediately picked up. The Thai, in particular, are great lovers of lucky shrines and statues, as anyone who has spent any time in Bangkok could attest.
So I have always been a devotee of Il Porcellino, the beautiful statue outside Sydney Hospital said to grant wishes to anyone who throws some coins in the box below him and rubs his nose. I adore this bronze pig, and will go out of my way to rub his snout and make a few wishes. And, IMHO, he is a regular granter of boons! I won't disclose too much, but take it from me, almost all of the wishes I have made in front of him have come true.
The exquisite statue was a gift to the state of New South Wales from an Italian Marchessa, and all the money thrown at him goes to the hospital.
Email Post
Labels: art devotion lucky statues superstitions sydney