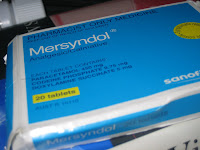 OK, well I pretty much always have a headache, and I try to avoid blogging about it 'cos it's kind of dull. Plus I've been reading Wallace Wattles, and he says we shouldn't talk about things we don't want in our lives.
But I have a shocking headache tonight. I can barely move.
I know I've been building up to it, having had a low-level headache every night for about a week now. But today it's turned into a doozy.
I had to drive to Penrith, a headache inducing activity all on its own, but then this afternoon I also had to go to the optometrist, and he did all sorts of crazy things with my eyes, including putting in some of those nasty drops that make your eyes swell up. By the time he was finished with me I was close to throwing up, and when I got outside there was a massive rainstorm going on, and I had to stand under an awning in Cabramatta for the best part of 40 minutes. It was surreal.
So I've taken a crap-load of Mersyndol, in an effort to dull the pain. I know it won't take away my headache, but it will at least dull the edges of my consciousness, and maybe cause me to pass out and hope that tomorrow this will all be a bad dream.
I know I probably take too much Mersyndol - I have probably become totally codeine tolerant by now, and I do have to take bigger and bigger doses. But what are my options? It's that or never leaving the house, and I know which I'd rather.
Email Post
Labels: headache healing penrith

Anonymous said…
Have you tried Suvlan or Imigraine? They're prescription, but they're the only things that work for me when I have a migraine.
12 August 2008 at 02:05