I went to see the Sydney Biennale on the weekend - it was my last chance, and I'd been putting it off for months. I always love the Biennale, and would love to visit some of the others around the world some day. I always love the spirit of fun and adventure, the youthful exuberance of naive artists thumbing their nose at an establishment that is sponsoring them lavishly. Yes, I know it contains much of the same old agitprop, but it puts a smile on my face to know that there are still people out there keeping the dream alive who haven't become cynical and world-weary old beasts like me.
Some of the highlights for me were a series of photos of an artist being kicked down some stairs, a dead horse hanging from the ceiling, and a table full of innocuous looking objects from Spain that might all be used in a terrorist activity. 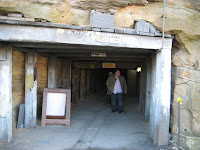 But the real star of the show was Cockatoo Island. This immense, unused shipping depot is a brilliant site, and absolutely perfect for a large-scale public event. There were free ferries from outside the MCA, which meant that on a sunny Sunday we were lucky to get a seat.
Cockatoo Island! What a revelation!

A huge place, filled with tunnels and abandoned pieces of industrial equipment and vast empty warehouses 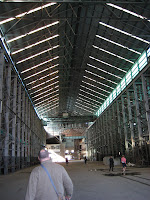 
The whole place could have stood as its own art installation, and indeed, most of the pieces on display were dwarfed by the incredible industrial beauty of the site. 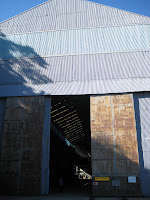 Probably most successful was the sound installation in the dog leg tunnel, which really just built on the atmosphere of the terrifying, dark rail tunnel and turned it into a scene from Blair Witch Project.
We spent an exhausting afternoon exploring the exhibitions and the island - an absolutely amazing time.
Email Post