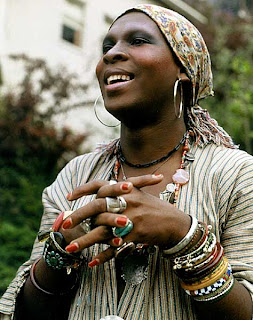 Probably the only person to have been simultaneously the King and Queen of Disco, the fabulous Sylvester was one of the best artistes of the era and he made everyone feel mighty real.
There probably never was a more unlikely pop star - a plump, plain black boy with a squeaky voice, Sylvester was a screaming queen to boot. Born and raised in LA, Sylvester was brought up by his single mother and his life was hardly the stuff of fairytales. Probably as a consequence of his outrageous facade and uncompromisingly queer attitude he never really made it into the mainstream. His androgynous looks and voice were simply too much for the straight, white fans of mainstream disco, though his amazing sound meant that he always had a cult following and was the singer that other, more commercially successful, artists turned to for inspiration.
Sylvester's sexual identity was always something of a mystery. That he was queer was absolutely certain, but if he identified as gay man, drag queen or transgender I never have been able to work out. Which makes him all the more fabulous, of course.
Towards the end of his life Sylvester made it to Sydney, where he headlined at the Sleaze Ball. This was well before my day, but older friends who were there assure me that he shone, and that, despite being ill, he was still quite curvaceous. Some suggested that he had even begun to make a full transition to the opposite gender.
I remember as a young man watching Rage late at night and seeing an ancient video clip of Sylvester singing Rock the Box, which was often repeated. I was instantly obsessed with this fascinating and gender-eluding character. Probably his most famous song is You Make Me Feel (Mighty Real), which was a big hit for Jimmy Somerville in the late 80s. Sandra Bernhard also did an interpretive version of it in the early 90s.
Sylvester died of an AIDS related illness in 1988 at the age of 40 - one of a generation of brilliant artists, performers and identities lost and sadly missed.
RIP Sylvester - you are still loved and missed, and your glorious music will live forever. You truly are a star.

Walter Mason said…
Thanks Jacquie.
He was amazing, and he had such an incredible impact on me, seeing him on TV as a young man.
You know, these days I find myself listening to him more and more - what a voice!
24 July 2012 at 22:12