I was at Adyar Bookshop last night to listen to the fascinating Barry Eaton talk about his wonderful new book Afterlife. While there I bumped into an old customer, a charming and friendly woman who recognised me instantly and told me she still always reads my blog! What a delight it was to hear that. Sometimes the blogger becomes dispirited, thinking that no-one looks or cares, so it is wonderful to be reminded that you do in fact have a silent readership. She commented on my piles of books, and I had to assure her that I always read them. While at Adyar last night I picked up a CD I had been wanting for a long time, a collection of sacred music compiled by Caroline Myss and sung by the Bellissima Opera called Voices of the Sacred - it really is something else. So I've popped it on now and will tell you about the enormous pile of biographical material I have to read this month. From the top: 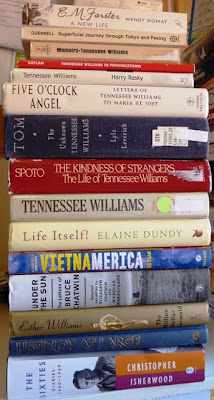